Chris T. Walsh: A legacy of rigor and excellence 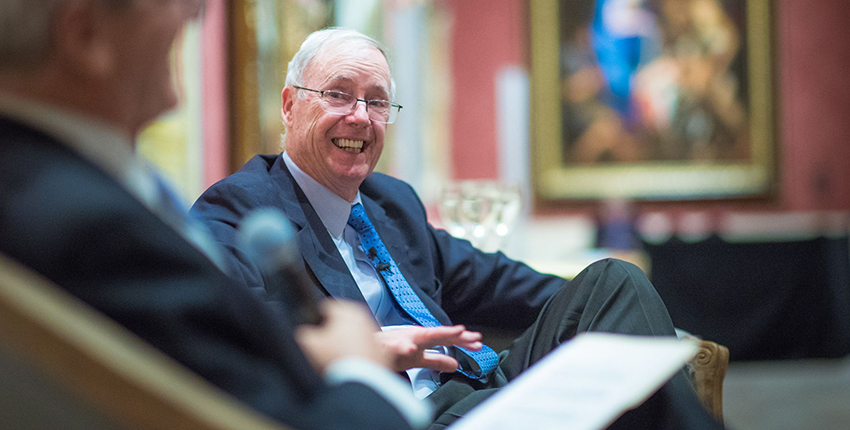 Christopher T. Walsh, the internationally respected and unconventional enzymologist who revolutionized the study of antibiotics, including antibiotic resistance and the natural production by living organisms of molecules that can become new medicines, died on Jan. 10, at the age of 79, following a fall.

Walsh’s work at HMS and MIT broke ground by bringing together the traditionally separate fields of chemistry, biology, and medicine. The melding of these disciplines allowed Walsh and those who followed him to make headway in areas that had thwarted predecessors and to forge new paths toward improving human health.

One of his pivotal achievements was the unraveling of the molecular mechanisms by which bacteria develop resistance to antibiotics, specifically vancomycin, a last-ditch option for drug-resistant infections.

Those who knew Walsh were as moved by his warmth, humor, encouragement, out-of-the-box thinking, high standards, and dedication to mentorship and gender equity as they were by his scientific achievements.

“Chris Walsh possessed a luminous intellect and a generosity of spirit that made him an inspirational leader by example: Everyone around him aspired to work harder and be more rigorous because he respected excellence and inspired excellence in others,” said HMS Dean George Q. Daley, who worked alongside Walsh as faculty in BCMP.

“His leadership at MIT, HMS, and the HMS-affiliated Dana-Farber Cancer Institute has left a legacy of rigor and excellence,” Daley added. “Our hearts go out to his family as we send our condolences for his untimely passing.”

Walsh was driven by curiosity about the chemistry that occurs inside living creatures.

In a 2010 video from the Welch Foundation, he spoke about developing a talent for “prospecting for new chemical reactions in living organisms.”
“I think my ‘aha’ moments are realizing this may be the first time anyone is seeing this chemical transformation in a living system,” he said.


Walsh helped establish the field of chemical biology. He was best known for his research discovering the inner workings of enzymes, and his fascination with understanding how bacteria synthesize natural products drove a number of important health-related discoveries.

His team’s elucidation of the pathway by which bacteria develop resistance to vancomycin, featuring five required genes, opened the door to developing new families of antibiotics that combat resistant bacterial strains. Among those who stand to benefit are cancer patients who contract life‐threatening infections during chemotherapy.

Other notable discoveries included identifying so-called suicide substrates that cause enzymes to self-destruct; revealing how key classes of molecules work and how their structures determine their functions; and gaining insights into siderophores — structures in bacteria that leach iron from hosts and offer a way to thwart infections by E. coli, Salmonella, and bacteria that cause tuberculosis, pneumonia, cholera, plague, and other illnesses.

Walsh also had a keen interest in translating laboratory discoveries into new medicines and was at the forefront of the birth of the biotechnology industry. He co-founded the company Immunogen, whose technology was incorporated into the cancer drug Kadcyla. He was also one of a group of MIT faculty members who became founding consultants to Genzyme. He served on boards of directors or scientific advisory boards of numerous biotechnology companies, including Millennium and Leukosite.

Walsh was born Feb. 16, 1944, in Boston. He recalled his time attending high school at the demanding Roxbury Latin School in West Roxbury, Mass., as a “defining experience” in giving him a love of learning and belief that he could become a scholar.

His path into research began as an undergraduate at Harvard College, where he studied with John Law and renowned biologist E.O. Wilson to identify the fire ant trail substance pheromone. That work resulted in a publication in the journal Nature on which Walsh was first author. It marked the start of Walsh’s prolific career as a researcher and author of more than 800 articles and 10 books. His first book, Enzymatic Reaction Mechanisms, published in 1979, is widely recognized as a classic in its field, as are his two succeeding volumes.

After graduating from Harvard in 1965, Walsh earned a PhD in life sciences from Rockefeller University (known then as the Rockefeller Institute for Medical Research). There he developed a passion for enzymatic and natural product biosynthesis. He continued his studies on enzymatic reaction mechanisms with Robert Abeles at Brandeis University on a Helen Hay Whitney fellowship.

Walsh’s determination to bridge chemistry and biology resulted in a joint appointment between the two departments at MIT in 1972. During his 15 years there, he served as head of the chemistry department and led a lab at the forefront of developing chemical approaches to analyzing how enzymes synthesize natural products.

“He had exquisite taste regarding fields that were about to take off,” said David Golan, dean for research operations and global programs and professor of BCMP in the Blavatnik Institute at HMS. 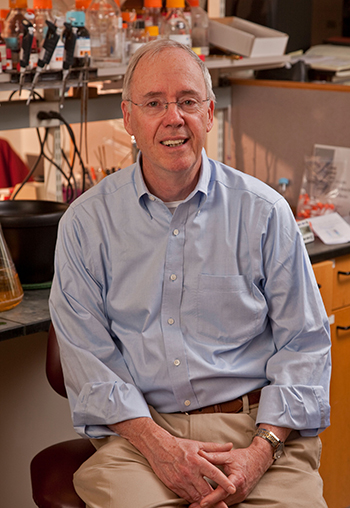 Walsh’s leadership inspired those around him to think in new ways and push themselves harder. He mentored hundreds of trainees and helped women in particular overcome obstacles related to a male-dominated scientific apprenticeship system.

Walsh also helped reshape the School’s MD curriculum, dubbed New Pathway, and opened up the School’s options for graduate training by allowing PhD candidates to pursue research in more than one laboratory or department through the Harvard Integrated Life Sciences program.

“Chris was a giant intellectually, scientifically, and organizationally, and a kind and generous colleague, mentor, and friend,” said Golan. “He transformed HMS medical education and graduate education and encouraged so many of us to achieve more than we thought possible. He will be sorely missed and fondly remembered.”

In 1992 Walsh became president and CEO of Dana-Farber Cancer Institute. He stepped down from his administrative positions at Dana-Farber and HMS in 1995 to redirect his attention to research.

He reflected on his career in the Journal of Biological Chemistry in 2010.

Walsh took on an adjunct professorship at Stanford University in 2013 and became involved in a cross-disciplinary institute there, known as Sarafan ChEM-H, dedicated to understanding life at a molecular level and applying that knowledge to improve human health.

“Chris was naturally generous and uncommonly wise,” said Carolyn Bertozzi of Stanford, whose research spanning chemistry and biology earned her a share of the 2022 Nobel Prize in Chemistry. “He saw his retirement as an opportunity not to step back but to step into a new role as a scientific advisor and mentor at Stanford, including helping Chaitan Khosla and myself as we conceptualized and then built Sarafan ChEM-H from the ground up.”

“He was the greatest biochemist of the past century, whose contributions as a researcher, teacher, mentor, and friend are simply immeasurable,” Bertozzi added. “This is a deep and acute loss for all who knew him.”

BCMP held a symposium in honor of Walsh’s scientific legacy and his 75th birthday in 2019. There, it was announced that some 150 of Walsh’s family, friends, and colleagues had raised more than $4 million to establish an endowed professorship at HMS in his name.

“Chris was an extraordinary scientist whose leadership brought structural biology and the then-nascent field of chemical biology to Harvard Medical School,” said Stephen Blacklow, current chair of BCMP and the Gustavus Adolphus Pfeiffer Professor of Biological Chemistry and Molecular Pharmacology in the Blavatnik Institute at HMS.

“He was also well-loved by many in our community,” said Blacklow. “His mentorship and guidance had a tremendous influence on so many careers, including mine. He was a role model, colleague, and friend, all wrapped in one. It is a source of comfort to know that the 2019 chemical biology symposium gave him great pleasure and that there will be a Christopher T. Walsh Professorship in the department that will endure.”

The first recipient of the professorship has not yet been named. 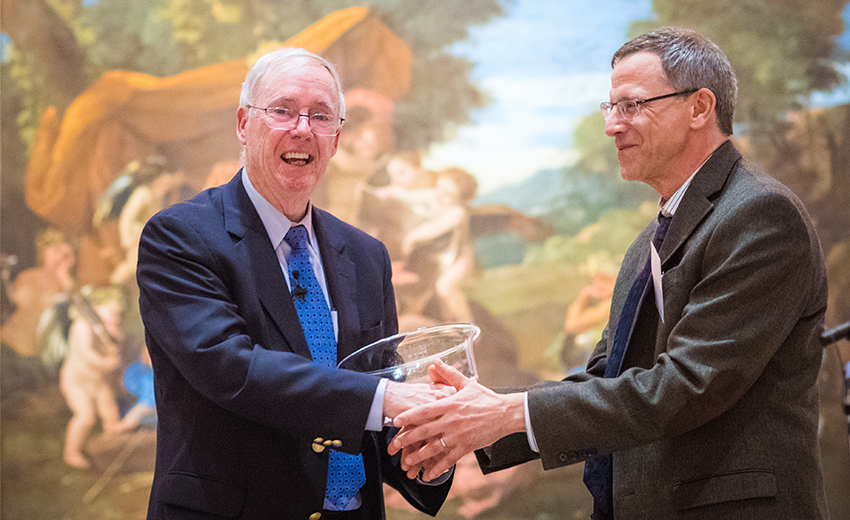 Walsh receives a glass bowl from Stephen Blacklow in 2019 to mark the establishment of the Christopher T. Walsh professorship at HMS. Image: Gretchen Ertl

Walsh received numerous honors and awards for his contributions to science. He was a member of the U.S. National Academy of Sciences, U.S. National Academy of Medicine, American Academy of Arts and Sciences, and American Philosophical Society. He shared the prestigious Welch Prize in Chemistry in 2010 with Joanne Stubbe, a lifelong friend and colleague from MIT, and received the Benjamin Franklin Medal in Chemistry from The Franklin Institute in 2014.

Walsh was devoted to his wife of 57 years, Diana Chapman Walsh, president emerita of Wellesley College; his daughter, Allison Kurian, professor of oncology at Stanford Medical School; and his beloved grandson, Sean.

A celebration of Walsh’s life will be held at a future date. Charitable donations can be directed to Sempervirens Fund.